As M5Stick only has three buttons, I’d like to prototype a control scheme based on accelerometer either by tilting or tapping the device from the sides.

Maybe we can reliably detect “directional” taps on a device in order to move a cursor by tapping the device from its sides.

Detecting a single tap can be done by sampling the accelerometer often enough checking if the result (conveniently in Gs) is over a threshold.

See the official M5StickC Dices example for the full source.

Getting a sense of direction is harder, as there will be a movement on two axes (X and Y) at once. We’re ignoring the Z axis and treating the device as if laying flat on a desk and getting tapped from one of four sides (left/right/top/bottom side).

A naive collecting program logging the output to Arduino IDE serial plotter would collect the accelerometer output of m5stick and output the values over serial port to be captured by the serial plotter:

Unfortunately there was some overhead outputting the floats to the Serial.print routine, so I converted them to integers and discarded the empty values.

In the end it was better to collect the data into some kind of a buffer continuously and then output the data later.

The following plot describes the measurements obtained from the accelerometer after directional taps. The Y axis contains acceleration in Gs. 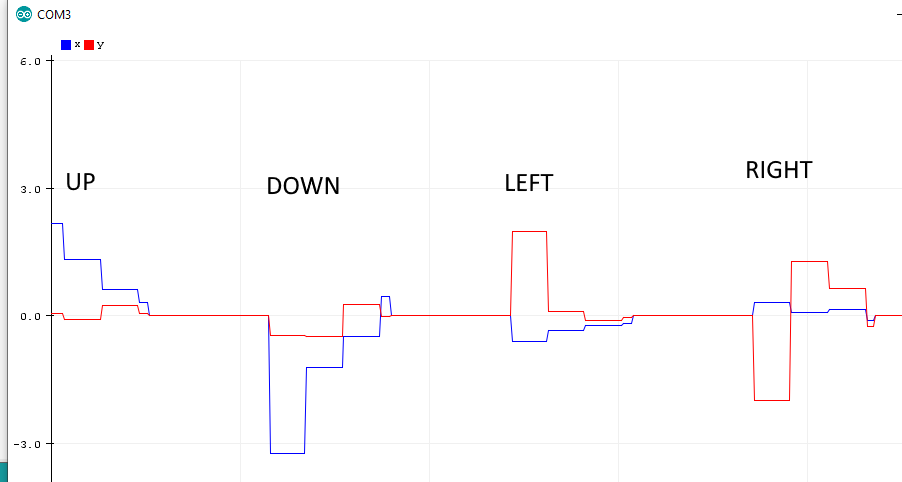 From that we can build a table that shows which axis was impacted the most by a directional tap.

Note that there could be two peaks that indicate a recoil of the tap.

The following diagram describes the implementation as a state machine transitioning between the following states:

We can to determine the direction (X/Y) by seeing which axis was hit the hardest (the tallest peak) by comparing the absolute value of the x/y peak. Direction (positive/negative) could be determined by looking at the sign of the peak sample.

We also would need a buffer (ring or linear) to store the last N samples if we want to record continuously. We should start collecting data into the buffer as soon as a pulse arrives, the pulse being a certain amount of Gs. Then we should collect N samples to collect the full signature of the tap on both X and Y axes.

I chose a sampling frequency of roughly 1 kHz, by adding a 1 millisecond delay between sample collections and using 32-sample buffer as the accelerometer settles after a couple of milliseconds after a tap.

The most interesting piece is the evaluation function. It

How other people do it

While googling on how to do that, a guide to an unrelated chip https://www.nxp.com/docs/en/application-note/AN3919.pdf described a similar algorithm.

To do this in a real application we probably can’t just keep collecting and evaluating samples at 1 kHz, as it would use a lot of CPU time that could be better used for application logic or rendering.

We can use EP32 hardware timers instead. See a sample gist for implementation and a tutorial at techtutorialsx.com. 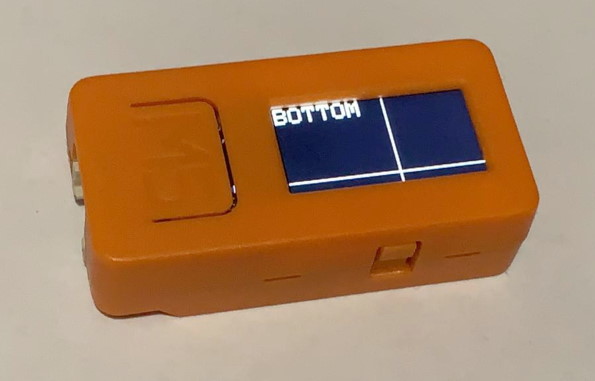