A friend told me about a cool new open-source instruction set architecture called RISC-V (pronounced risk-five). As I wanted to learn more about the architecture, I decided writing an RISC-V emulator would make sense. One of my goals include running a Linux on it, much inspired by Fabrice Bellard’s awesome JSLinux project.

I initially started using the same 32-bit RISC-V Linux image as per Bellard’s technical notes, but I needed to add some of my own code for debugging purposes. As RISC-V is already supported by the official Linux Kernel, and the Buildroot project provides a nice framework for cross-compiling a complete and bootable Linux environment, I used it as a starting point.

We’ll be building the:

emuriscv’s architecture is rv32ima - RV32I is the default integer instruction set, M are the integer multiplication and division instructions and A is the extension for atomic instructions.

As I haven’t implemented the floating point instructions yet, we’ll also be using ilp32 ABI for 32-bit soft-float.

It’s a single core, so the atomic operations have been easy to implement :).

emuriscv can’t handle elf binaries, so we strip the binaries with objcopy to make a raw binary from an elf one:

To prepare debug symbols (to correlate in-emulator instruction pointer to the source code) I used objdump:

This step needs be done for bbl and linux kernel.

First thing you need is a compiler toolchain. The official one is called riscv-gnu-toolchain, the documentation is good.

To compile and build riscv-gnu-toolchain for rv32ima you need to:

Buildroot provides us with a complete embedded linux “distribution”. We need to build against the rv32ima architecture.

I went for no extra packages, busybox should be enough for the time being.

To not have to deal with a file system, devices and file system drivers, there is a neat option to generate a ramdisk filesystem image (initramfs) and then include that into the kernel binary image.

There is an option of using uncompressed or compressed file system image. The minimal-ish buildroot initramfs ended up being 16 MB in size, compared to a gzipped version at 5.3 MB.

Decompressing with a debug build of emuriscv took much longer (minutes) than just loading the bigger uncompressed image, so the uncompressed image is faster for debugging. The differences with a release build are much smaller, as the decompression runs relatively quickly.

Inspired by JSLinux, I used Berkeley Boot Loader (bbl), which is a supervisor execution environment, designed to host the RISC-V Linux port.

It’s hosted in the riscv-pk repository.

After making a raw binary as described above, we end up with bbl.bin as our target artifact.

I have used riscv-linux @ 4.15 as my starting point. My changes are collected in the fork of riscv-linux

Setting up the kernel options for as simple as possible - everything off, network support, security, most of the devices as well.

The most important being platform selection to even start the boot process:

Base ISA: RV32I, no compressed instrictions, no SMP, no FPU support. Networking support can also be off.

The important devices were:

A nice-to-have for diagnosing the boot process is enabling “Show timing information on printks”, “Enable dynamic printk() support”, and setting the highest log levels in the “printk and dmesg options” section.

Including the buildroot initramfs filesystem is done via the General setup -> Initial RAM filesystem and RAM disk support - point to a rootfs.cpio or rootfs.cpio.gz file system image built by buildroot in its output/images folder.

The RISC-V SBI console is set up as a boot console, which should be used for early boot only and will get deactivated after the virtual memory system is initialized due to where it’s loaded in the “initial data” memory. Removing the CON_BOOT flag and the __initdata modifier loads it into the memory in a way that it persists as an early and “later” console.

We place the following bits of machine code at 0x100:

Then BBL proceeds on to set up the supervisor mode and goes on to start the Linux boot process. 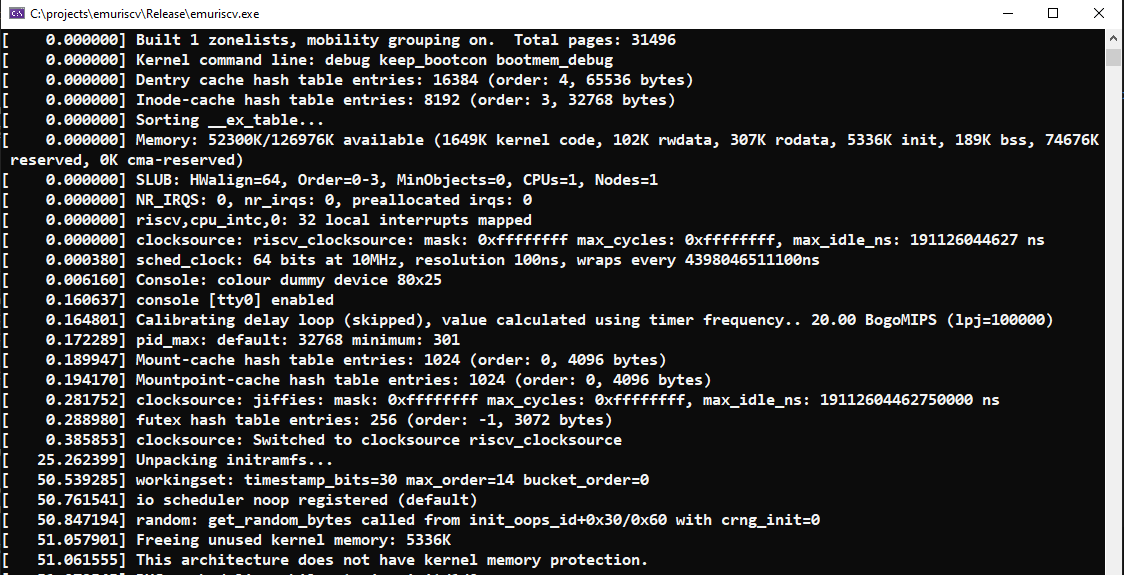