In the last part I ended up with a partially working CPU with most of the single-clock instructions implemented. To get meaningful output I then implemented the display sprite operation next.

The DXYN opcode is described in the original manual as:

Wikipedia says that the sprite has a width of 8 pixels and a height of N+1 pixels. Each row of 8 pixels is read as bit-coded starting from memory location I.

Because the X coordinate doesn’t need to be aligned with 8, it’s possible that the drawing operation will span two framebuffer bytes - we’ll call them the left and right byte.

We need to read every row of the sprite, XOR them with the left and the right screen byte and then write these back.

To keep my CHIP-8 design modular and testable, I wanted to spin the drawing logic off to a separate module. In the spirit of the old gaming consoles I’d like to call this unit a PPU (Picture Processing Unit), as it accelerates sprite drawing by hardware. Hardware sprites were sometimes a part of Video display controllers that were used in the 1980s home computers.

I’ve created a state machine that iterates through the following steps, doing a loop for every row of the sprite.

The PPU’s main interface consists of:

The DXYN instruction itself makes the assert the draw signal, then the CPU waits until the busy signal goes low. It should also connect the address bus to the PPU for the duration of the sprite drawing.

This design really took a while and a lot of re-reading on memories, state machines, Verilog and a lot and lot of simulation.

The delay is caused by using a registered outputs for the memory addresses, so on clock #1 we set the memory read address, on clock #2 the RAM registers the output and it arrives back in the PPU on clock #3.

I decided to store the sprite into a 16-bit register, shifted by the amount of the “overlap” with the second bit (x % 8), so the left byte interacts with sprite_row[15:8] and the right byte with sprite_row[7:0].

An example of the code - storing the left screen byte:

We know that a collision happens during the write if any of the bits are the same in the screen byte - so we can use the Verilog | unary operator that will peform the logical or operation on all bits of its operands and returns a single bit result: |(mem_read_data & sprite_row[15:8]);

Checking that it works

I created a Verilog testbench that connects the PPU to a memory that contains the sprites of a particular ROM,

I assert every few bits in the PPU testbench, but for a quick win, we can also dump the memory contents with a following command:

that produces a RAM dump in a following format:

We can then use a Python script to convert this into a monochrome PNG bitmap.

As the CHIP-8 specifications reserves the address 0x000 - 0x1FF for the interpreter use, we can designate the 0x100 - 0x1FF region as the internal framebuffer. The VGA driver is split into two modules:

The pixel generator reads the byte of the memory on every “pixel tick”, looks at the bit that corresponds to the CHIP-8 x/y coordinates and outputs black or white color on the VGA interface.

Note: It seems inefficient to read the memory for every pixel as we really need a new byte every 800 pixels (as we scale both x and y dimension by a factor of 10), but this module has nothing better to do anyway. We could add a shift register to read only once every 8th pixel clock cycle.

It’s not very integrated at the current stage, as I tested it with just the ROM and the CPU unplugged to avoid the CPU and the VGA module fighting for access of the same memory - I’d like to solve this in the next part.

I did a reuse my previous 128x64 LCD driver as well. As it expects its own 128x64 bit framebuffer, I implemented a memory copy module that copies main RAM region 0x100 - 0x1ff to the first 64x32 bits of the LCD framebufffer (without pixel doubling, it was just a quick hack).

To get something into the framebuffer in the current stage of the project I dumped the CHIP-8 RAM contents from my CHIP-8 C emulator) and converted them to the RAM .txt initialization format using a following Python script that reads each byte and outputs it as 8 bits on every line:

A sample framebuffer contents displayed on a big 32” VGA display. The noise following the 64x32 “pixels” is the next area of the memory - instructions of the program present at the address 0x200 following the framebuffer. 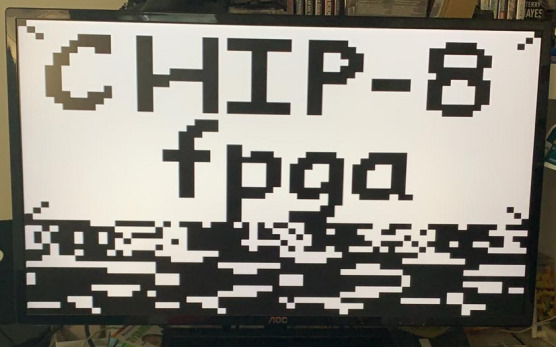 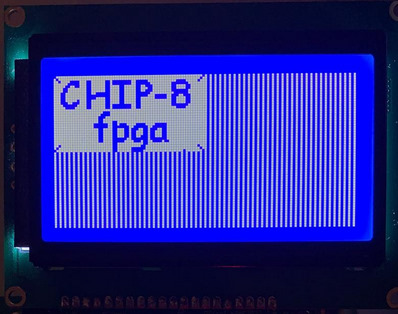 The CPU still needs some love as not all operations are implemented yet. To get it all working together we need some kind of bus to transfer data between CPU, memory and PPU. The VGA or LCD renderers are not scheduled yet, so the would fight with the CPU for the bus - I think the most reasonable solution would be to let the CPU run during the VGA vertical synchronization window.

Then we still need some user input (from a keypad), a sound output to a buzzer, wire it all together and figure out a nicer way to load ROMs.