I don’t like online ads too much. The easy option on a computer is to use an adblocker, but on some devices you are out of options (smart TV, or mobile games with in-game ads). I have started using Pi-hole about 2 months ago on my home network to block ads and tracking across the entire home network, on all devices. Pi-hole is a self-titled black hole for internet advertising, as it acts as a DNS server and blocks requests on a name resolution lavel, based on a blacklist. s

Pi-hole on the go

I’d like to use Pi-hole on my phone also outside my home Wi-Fi. As I happen to host my services in the Azure public cloud, I decided to set up a small Ubuntu server instance and install Pi-hole on it.

The following settings needed to be applied:

The installation of pi-hole is straightforward, as per the official documentation

If you want to use Pi-vpn as well, remember to set Pi-hole DNS to listen on all network interfaces, otherwise the requests from the OpenVPN adapter will not get through.

I used the CloudFlare DNS server (1.1.1.1) for the Azure Pi-hole, it’s also possible to run your own DNS server (unbound) for a bit more request caching.

When this works, we can repeat this on a remote computer with nslookup github.com PIHOLE_PUBLIC_IP. If this doesn’t work, check Azure inbound port rules in the Networking screen for your VM if you haven’t missed the rule for TCP port 53.

Unfortunately it’s not possible to just change the DNS server on an iPhone for requests done on a cellular network. A recommended way is to set up a VPN profile that will handle the DNS requests. We already have a Linux box, so we can set up a VPN server on it as well.

Installing pi-vpn is straightforward, as per the official site:

We should point the DNS to the OpenVPN IP address of the pihole server. If you need to change this later, look at /etc/openvpn/server.conf

Then generate a profile with openvpn add, transfer the .ovpn profile to your computer with scp and upload it securely to your phone / device.

Just skip the Pi-vpn part and install Pi-hole on a Raspberry Pi as intended. It works nicely on a Pi Zero as well. Keep in mind that frequent writes if you enable full logging can use up your micro SD card write cycles sooner.

It’s also easier to fine-tune a local network Pi-hole if you use static DHCP address assignments and then enter those hostnames into the /etc/hosts file.

Pi-hole dashboard (lots of requests when the home devices are active!) 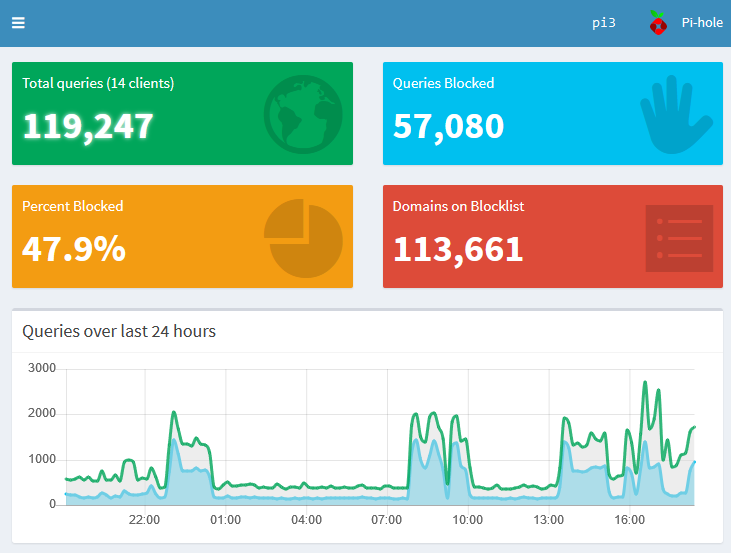