Doom on a screen, again

Recently I’ve been playing with displaying DOOM on various devices (a smart watch and a smallish IoT stick), and previously I also played with a 128x64px LCD screen connected to my FPGA board.

After an afternoon of tinkering I got DOOM to display on my LCD screen, see the result for yourself:

I already had a DOOM port with serial output handy from the previous article. The only required changes were adjusting the output framebuffer size to 1024 (128 * 64 bits) bits and experimenting with the baud rate until the frame rate was high enough.

This time I didn’t roll my own, but I used an implementation from an article by sudonull. It works fine with baudrates up to 3 MBaud, which seems to be the maximum supported data rate for the CH340G USB-to-serial chip on my board.

The UART receiver emits a signal rxReady when a byte (rxData) is ready to be consumed, which needs to be cleared with rxReset. I added a simple state machine around this reset mechanism.

Then I extended the memory-mapped LCD controller I already prepared previously (for a text-mode) to have a larger buffer and use the graphic mode commands. The final thing remaining was to wire the UART receiver’s signals and continuously write to the dualported RAM, which gets read by my controller and fed to the display’s ST7920 chip.

I got an acceptable result when using 1 MBaud transmit rate. This should allow for around 100 frames per second (of 128*64 bits framebuffer).

To set up the baud rate of the serial port on Windows for redirection, use

To set up port speed:

I’m finally looking forward to implementing a VGA controller (with a RAM-based framebuffer), so ideally I could get this running on a larger display :) 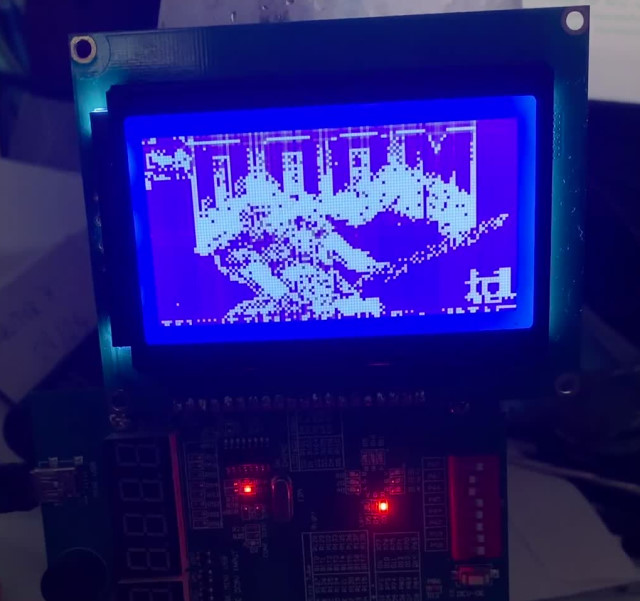